Do Artificial Sweeteners Cause Cancer? Get The Inside (Sugar-Free) Scoop!

Raise your hand if you use artificial sweeteners! 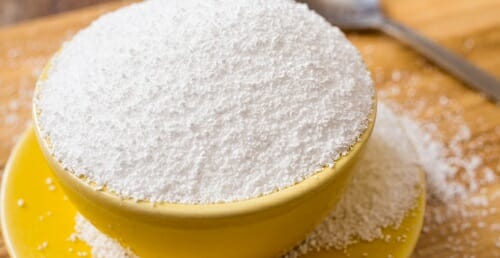 You can’t see it, but my hand is definitely up there. I consider myself to be pretty much “on top” of my nutrition–I eat to feel my best, and while that usually means vegetables and lean protein, sometimes it means a fudge brownie protein bar (or two) or a diet coke.

I know I’m not the only one. Tons of people who are trying to lose weight/cut sugar/eat healthy choose to forego the sugar-saturated, high-calorie treat in favour of the lower-calorie, sugar free option–and congratulate themselves for making the ‘healthier’ choice. And are they wrong?

So, when I caught wind of the rumour that artificial sweeteners are causing cancer, I knew I had to investigate. Would my love of cookies-and-cream protein bars prove to be the death of me–literally?

But, where do artificial sweeteners stand when it comes to their carcinogenic potential?

There have been a few studies that have suggested a link between artificial sweeteners and cancer. One study in the 1970’s found that rats who consumed saccharin (an artificial sweetener commonly found in diet soft drinks) were more likely to develop bladder cancer than non-consuming rats; the controversy following this study actually persuaded the government of Canada to ban saccharin, until subsequent studies concluded, by and large, that similar findings were unlikely to be demonstrated in humans, and the ban was lifted in 2014.

Another artificial sweetener that everyone loves to hate is aspartame. Relative to other artificial sweeteners, aspartame is inexpensive and easy to produce, and is commonly seen in diet pops and gum. Entire brands and products have been created around the belief that aspartame is unhealthy, and likely slowly killing you. But is it giving you cancer? One study asked this very question and concluded, that, no, aspartame is likely not going to give you cancer (or a brain tumour, at least); one limitation that they did admit to, however, was that the study was performed on children, and thus, they were unable to speak to the longterm carcinogenic effects of aspartame. That being said, other studies have produced similar results.

The artificial sweetener that caused me the most concern, personally, was sucralose (also commonly known as Splenda); up until recently, we believed that sucralose simply passed through the body, without being absorbed. New scientific investigations, however, are countering this belief and are finding that sucralose does, in fact, get absorbed.

I was also told recently that sucralose not only promotes the growth of existing cancer cells, but that it actually produces cancer cells. How is that possible? I wondered, and quietly freaked out.

One rat study done in 2012 found that the more sucralose a rat was fed during its lifetime–from conception until death–the more likely it was to die of leukemia. Successive studies, however, found negligible evidence to support the conclusion that sucralose will cause cancer in humans. That being said, many recommend against baking or cooking with sucralose, one study found that sucralose at high temperatures can release toxic chemicals known as chloropropanols.

Is there such a thing as a good artificial sweetener? Stevia may be as close as we can get. Some people complain of the strange aftertaste, but, personally, I have found it no stranger than that of other artificial sweeteners. It has been touted as a more ‘natural’ sweetener, having been used since ancient times, and is 100-300 times sweeter than sugar. In one study, researchers found that people who ingested stevia reported the same level of satiety as people who ate just regular sugar, in spite of the difference in caloric load (about 300 calories). They also found that stevia was better than both sugar and aspartame in controlling glucose and insulin levels. And when it comes to cancer, multiple studies have demonstrated that it may possess anti-carcinogenic properties!

When it comes to artificial sweeteners, I would recommend to indulge in moderation, and perhaps to be aware of the type of sweetener that you’re using. Stevia may appear the best option, but be aware of any other ingredients or compounds that manufacturers might include in their sweeteners. If you are interested in exploring in more depth the effects of different food and additives on your body and performance, check out Infofit’s nutrition course offerings! We have multiple courses and programs to meet your level of interest, and can even help you on a path to a career as a certified sports nutritionist!

Consisting of ten instructive online learning modules that took more than a decade to research and develop, this comprehensive distance learning education program certifies each student as a Certified Sports Nutrition Advisor (CSNA).