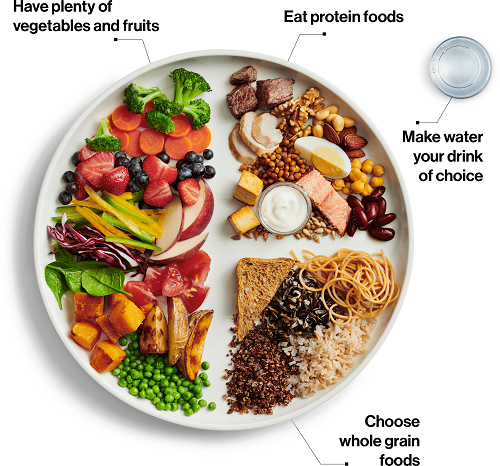 It has been nearly twelve years since the Canadian government last updated its food guide. If you have lived in Canada for the past decade or so, you likely have some passing knowledge of the old food rainbow, which boasted dozens of food items and four different classifications: Vegetables and Fruit, Grain products, Milk and Alternatives, and Meat and Alternatives.

The new food guide, released January 22nd 2019, does away with the four-section rainbow and instead offers as its centrepiece a photograph of a plate of food, headed with the recommendation, “Eat a Variety of Healthy Foods Everyday”. The plate is divided into three groupings: half of the plate is dedicated to fruits and vegetables, a quarter to ‘protein’, and another quarter is whole grain foods. The guide also features a glass of water and the recommendation that you “Make water your drink of choice”.

According to the Government of Canada, the guide is a result of a two-year review of not only existing scientific studies, but of what is referred to as “the Canadian Context (what Canadians eat, their health status, and the environment in which they live)” and how Canadians actually use food guides in everyday practice.

The Essential Points We Take Away

Not only does the guide express current scientific thought, but it serves as a current reflection of Canada’s attitudes regarding food culture, personal health, media, and more. So, what essential points can we take away from this important new document?

Got Milk? Not Anymore!

The guide entirely does away with the “Dairy” category present in its 2007 version. The only nod given towards dairy products is a tiny pot of what looks to be yogurt in the “protein” section of the plate.

Interestingly, Health Canada’s scientific review (that is available to the public here) does little to explain how they came to eliminate dairy. Some speculate that the guide’s stated interest in ”maintaining] credibility” can be read as an allusion to the earlier versions of the food guide which many thought to have been inappropriately influenced by political and industry interests (most notably, those of the dairy industry).

I would also speculate that when taking into account that a majority of the world’s population is lactose intolerant (most especially in populations of Asian descent), alongside the fact that the government surveyed over 20 000 people of varying ethnic backgrounds and lifestyle choices, I would not be surprised if they found that not that many people regularly consume dairy products.

What is for sure is that Canadian farmers, by and large, are not happy about the omission; president of Dairy Farmers of Canada, Pierre Lampron, voiced his concern that “Not only will this harm the dairy sector and the hundreds of thousands who depend upon it for their livelihoods, it also risks harming Canadian consumers by creating confusion about the nutritional value of dairy.”

A Strong Opposition to Processed Foods

The new food guide definitely has an opinion about foods high in added sodium, sugar, and fat. In sum, they want you to avoid them all as much as possible. They offer a list of highly processed foods that they urge Canadians to limit in their diet.

They also offer tips to help avoid highly-processed foods; some of which include “replacing sugary drinks with water” and “stocking your kitchen with healthy snacks”. The guide also boasts a healthy recipes section, along with meal prep tips, so that you can make your own healthier, more ‘natural’ version of a favourite processed food (such as blueberry muffins).

Mindful eating is a concept that has only recently gained widespread recognition; nonetheless, the new food guide ambitiously tackles the issue in its healthy eating recommendations. If you are well-versed in contemporary food culture, or if you have ever struggled with emotional eating, you are likely familiar with the relationship between mindfulness and food. Though the topic is large and complex, it is interesting to see a government body acknowledge the personal and psychological aspects of food that go beyond the simple science of nutrition.

The guide also discusses the relationship between media and food consumption and reminds Canadians to be aware of ‘food marketing’ that may unduly influence a person’s decision to eat a certain food. They recommend that a consumer “decide whether a food item is healthy by using food labels rather than relying on marketing messages alone”.

I would highly recommend checking out Canada’s new food guide. It goes in an entirely different direction from its last iteration. Its perspective is more holistic, more inclusive, more socially and culturally relevant and, I argue, more scientifically credible.

Students will develop the expertise needed to design personalized nutrition protocols for clients with a wide variety of fitness, health and sport related objectives.