Is Chronic Inflammation the Root of all Evil? Plus, Tips for Relief 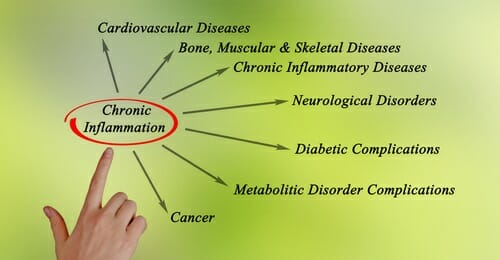 Recently, inflammation has been ‘trending’ in discussions of diet and fitness; the word ‘inflammation’ commonly conjures images of red, feverish skin and infected wounds. But, frequently, we can’t physically see the inflammation that is compromising our health. And, often, we think we can’t feel it either.

I would predict that most people, when questioned, wouldn’t look at an individual with Type II diabetes and identify the source of their health issues as inflammation. But—as has been suggested more and more frequently by recent studies—inflammation may very well be the origin of most, if not all, of our health woes, including, but not limited to: premature aging, irritable bowel syndrome, arthritis, eczema, etc.

Chronic inflammation happens when inflammation occurs in response to a bodily trauma–such as an infection or illness—and then it never subsides; it’s like your body yelling ‘INTRUDER ALERT’ long after the intruder has been apprehended and carted off to jail. Because inflammation, in most cases, is helpful—without inflammation, a paper cut would turn septic, and every virus would be debilitating and deadly. In the case of acute inflammation in a healthy body, once the trauma has been dealt with, the inflammatory response will recede and the body will return to its status quo.

Chronic inflammation can also be incredibly frustrating because of the vagueness—and variety—of its symptoms. There lacks definitive tests for chronic inflammation, though your doctor will test for elevated levels of C-reactive protein in your urine.

But just because it is difficult to know, definitively, that you are suffering from chronic inflammation, doesn’t mean that you just throw your hands up and resign yourself to lifetime of feeling-crappy. Countless studies have been performed, and papers written, with the intent of unearthing the key to reducing—and even completely resolving—inflammation.

So, if you suspect that you are suffering from chronic inflammation, or if you have been diagnosed with an inflammatory condition, there are lifestyle modifications that you can pursue right now to alleviate your inflammation.

Are you even surprised? Numerous studies have documented the effects of exercise on inflammation and have found that exercise decreases inflammation by various means; one study found that exercise mitigated the impaired growth-factor signalling in the brain caused by inflammation by increasing synaptic plasticity and improving metabolism and neurogenesis. Also, when it comes to aging (one of the most inflammatory activities that you can engage in), numerous studies have demonstrated an inverse relationship between physical activity and the inflammatory biomarkers of aging. And the level of activity required to lower levels of inflammation is “relatively modest” (as described by one scientific review); there is seriously no need for you to kill yourself on a treadmill. A brisk walk or a moderate-intensity resistance-training program is more than sufficient; some swear by water-exercise for its ability to spare inflamed joints.

One danger of exercise is the possibility of increased inflammation—if you go too hard with poor form and inadequate rest. Acute, unaccustomed exercise can cause muscle and connective tissue damage, especially if done at high intensities and for prolonged durations—and thus leading to inflammation. An elite personal trainer can help you to minimize the possibility of inflammatory exercise by designing a program that will safely and efficiently get you to your goals.

There is an astounding body of evidence to recommend such practices as yoga, meditation, and forays into nature for decreasing chronic inflammation. Experts are not entirely sure how it works, but study after study have demonstrated that practices to relieve mental and emotional distress have a direct positive effect on physical stress and chronic inflammation. Something as simple (and essential!) as getting enough restorative, high-quality sleep will also help to relieve stress and inflammation.

Curcumin is a compound found most commonly in turmeric and which has been shown time and time again to possess anti-inflammatory properties. Turmeric is enjoying a moment in the spotlight right now, so it should be no trouble to find recipes for tons of different dishes and recipes, including smoothies and lattes! Another herb, ginger, is incredibly popular and versatile and is also frequently touted as an essential anti-inflammatory ingredient.

Another possible tool to employ in the fight against inflammation is dietary fat, or more specifically, ketosis. The ketosis state is commonly induced by either a) radically restricting calories (which comes with its own set of drawbacks and risks) or b) a ketogenic diet–one high in fat, moderate in protein, and low in carbohydrates. As a society, we have long had a fear of fat but, as of recently, the tide seems to be turning in fat’s favour. And though the science is still new and far from conclusive, research has repeatedly demonstrated anti-inflammatory benefits in following such a protocol. If you are interested in a more in-depth discussion of the ketogenic diet, its benefits, and its possible risks, you can check out the Infofit article here.

If the ketogenic diet seems a little too radical for you at the moment, a more moderate change that you can make is introducing more omega-3’s into your diet. Research has found that foods high in omega-3 fatty acids, specifically eicosapentaenoic acid (EPA) and docosahexaenoic acid (DHA), are effective in ameliorating a body’s inflammatory response. If you have trouble getting enough fish into your diet, fish oil and flaxseed oil are both high in Omega-3 fatty acids and are a sound alternative to the real deal.

There has been some other, less conclusive research that has found that certain foods are more likely to provoke an inflammatory response; such foods include sugar, trans fats, dairy, oils high in omega-6 fatty acids, red meat, processed meat, alcohol, grains, and gluten; a person’s inflammatory response to food, however, is highly individual, and someone with a pro-inflammatory sensitivity to dairy, for instance, may have no problem with red meat. Please speak to your medical professional about an anti-inflammatory diet and before embarking on any kind of lifestyle change!

Hiring a certified Personal Trainer through Infofit is one of the best investments you can make with regard to your overall health and fitness.