What Are You Training For? Challenged Anything New This Week?

Movement culture  seems to be the emerging fitness trend around the world. It takes you away from the typical  gym workout of practicing the squat, bench or high intensity intervals, and takes you to a multilevel of excitement, focusing on the human art and athletic performance of movement.

My personal discovery with these athletic performance applications found in movement culture was while participating in an introductory capoeira class held at the world famous Axe Capoeira Vancouver. After attending the 1st class, I was addicted. 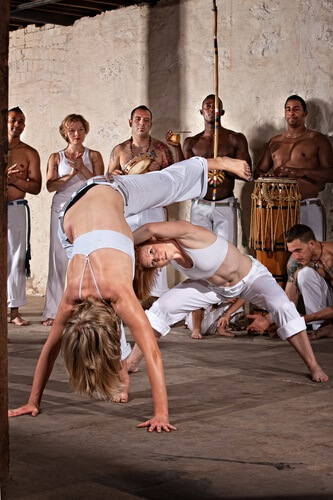 Removed completely from the gym’s classic circuit machines and lifts, we were taken into a group class of survival, where we were found crawling about, holding low to ground positions, that often touched muscles I thought I had never had, but was reminded of later.

Capoeira allowed me to relearn some of the movements I had success with while practicing gymnastics as a youth. Even though I was rather sore and aching, a lot of the movements made sense to me physically.  I could feel the changes in my overall body’s function both in day to day life and my improvement in velocity, flex and repel on the soccer field.

That then lead me discussing my new found passion among my athletic European peers. They, well seasoned athletes, introduced me to movement culture and raved about the fascinating and inspirational teachings of Ido Portal. They claimed that practicing his philosophies brings back what the human body was designed for. It includes yoga, gymnastics, calisthenics, functional training, and mixed martial arts particularly, capoeira; movement culture celebrates elite athletic performance with every possible range of motion the human body can do.

Ido Portal’s movement culture is more than just an expression of power, stamina and endurance, there are countless variables all encompassing the concept that allows you to gain control of lost range of motion, due to today’s organized isolated movement practices. His argument is that it does not matter how fit, flexible, powerful or cardiovascularly fit you are, what is important is how you move. You can be good at all these things and still move poorly, lacking the athletic performance to jump, climb, or break your fall.

Ido Portal’s movement culture teaches you to become a master of your body over gravity. His method is to move with grace, self respect, efficiency and softly; the less you sound, the better you are with self dominance.