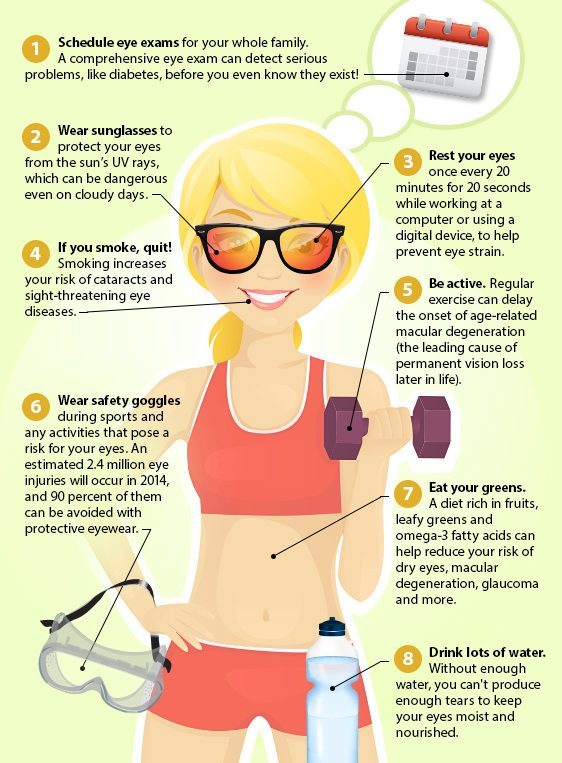 For sometime eye researchers have been trying to find a way to externally deliver growth factors or drugs to aging eyes, but currently, available methods involve a complicated risque process of  injections into the retina.

To be expected starting early to mid-forties, most people start to experience problems with their vision at close distances, especially computer tasks and reading.

For people over 40, the most common vision loss is age related. It’s a change in the eye’s ability to focus, progressing over time called presbyopia.  But some new exciting research suggests that regular physical exercise might protect our eyes as we age.

It’s no secret that exercise is known to reduce the risk of and slow the progress of macular degeneration, which occurs when neurons in the central part of the retina deteriorate.  40,000 middle aged distance runners participated in a 2009 study that showed those runners were least likely to develop eye disease.  The research had some holes where it failed to compare runners to non-runners, limiting its value. Nor did it explain how physical activity affects the likelihood of having the eye disease.

Interestingly, a team of scientists at Atlanta Veterans Administration Medical Center in Decatur, Ga and Emory University in Atlanta challenged that question.

Performed on mice, their research determined that aerobic exercise increases the levels of growth factors in the rodents’ brain and bloodstream. One particular growth factor, called brain-derived neurotrophic factor, or B.D.N.F., is known to contribute to the improvements in brain health and cognition after regular exercise.

The eye’s retina carries the same growth factor, and the researchers explored whether exercise might raise levels of B.D.N.F. there too, potentially affecting retinal vision and health.

Exercise Seems to Have Armored The Runners’ Eyes

To validate that possibility, the scientists gathered healthy, adult lab mice and divided one group to remain fairly sedentary throughout the day, while the other group of animals began running on treadmills at a reasonable rodent pace for 1 hour a day. After 2 weeks, half of the mice in each group were exposed to a bright light for 4 hours while the other animals remained in dimly lit cages. This light exposure is a popular method of inducing retinal degeneration in animals. It doesn’t accurately mimic the slow progressing disease in humans, but it causes a comparable time-compressed damage to the retina.

The group of  mice then returned to their former routine for another 2 weeks of either exercising or not. The scientists measured the changes in each animal’s eyes. The sedentary mice exposed to the bright light experienced nearly 75% vision  loss.

But the mice that had exercised before being exposed to the light retained about two times as many functioning retinal neurons as the sedentary animals. It showed that exercise, it seems, had armored the runners’ eyes.

Separately, the research team had other mice run or relax for 2 weeks, and then evaluated levels of B.D.N.F. in their eyes and bloodstreams. The running mice had far more. In addition, when the scientists injected still another group of mice with a chemical blocker for the growth factor before the treadmill and exposing them to bright light, their eyes deteriorated equally as bad as the sedentary mice. Concluding that when the rodents could not process B.D.N.F., exercise did not protect their eyesight.

When combined, the data suggest that physical exercise protects vision, at least in mice, by increasing B.D.N.F. in the retina. “Particularly people with a family history of retinal degeneration, and the general public who are concerned about their vision, should consider including a personal trainer as a potential treatment,” says Infofit’s fitness instructor and rehabilitation exercise specialist Andre Noel Potvin. “It’s easy, safe and cost effective.”

The little cost of a monitored fitness program with a personal trainer and the better vision results, is by far more safer and more pleasant than having a needle stuck into your eye.