What Are the Health Benefits of Apple Cider Vinegar

What Is Apple Cider Vinegar? 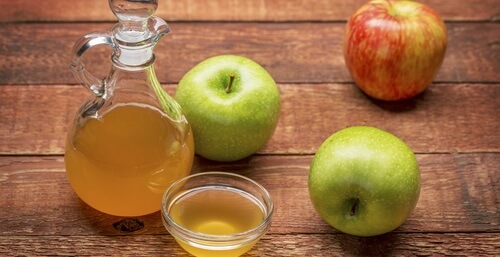 Apple Cider Vinegar is made up of bacteria that feed on the sugars and alcohol found in fruit juices, wine, honey or other similarly sweet liquids. Apple cider vinegar naturally starts from the juice of apples which gives it a milder more pleasant taste and smell.  Bacteria and yeast are added to the apple juice to start the alcoholic fermentation process. Then there is a secondary fermentation process where acetic acid-forming bacteria are added which converts it into vinegar.

Unfiltered, organic apple cider vinegar contains a mother (strands of proteins, enzymes and bacteria that have a cloudy, cobweb-like appearance). There have been no studies to support that the mother is responsible for any of the health benefits. Apple cider vinegar contains trace amounts of potassium while a high-quality product will also incorporate some amino acids and antioxidants.

Historically vinegar has been used as far back as 5000 BC by the ancient Babylonians. The fruit of the date palm was used to make both wine and vinegar, which in turn was used to preserve and pickle foods. Recorded history also shows the use of vinegar tracing back to 3000 BC in Egypt and 1200 BC in China.

Starting around 400 BC, in ancient Greece, Hippocrates began to prescribe a mixture of apple cider vinegar and honey for a variety of health concerns including coughs and colds. Throughout more modern history vinegar has been used as an antiseptic to clean wounds, as a cleaning product and even as a way to ward off the Bubonic Plague when mixed with garlic in a tonic.

What Are the Modern Health Uses of Apple Cider Vinegar?

Apple cider is the most traditionally used vinegar prescribed amongst natural health practitioners. Some of the claims include weight loss, reduced blood sugar levels, soothes sore throats, facial toner, dandruff treatment, mouthwash, acne treatment, wart treatment, natural deodorant, as an ulcer treatment, eases indigestion and may alleviate cramping and gas in your upset stomach, as a food preservative and may be able to slow the growth of cancer cells or even kill them.

All of these claims are not supported by science, but some, in fact, have had extensive research studies done to corroborate the claims. Research has been done on the efficacy of apple cider vinegar for weight loss, balancing blood sugar levels and improvement of diabetic symptoms.

The Most Successfully Proven Scientific Use for Vinegar

Almost certainly the most studied and successfully proven current scientific use for vinegar is in patients with type 2 diabetes. Type 2 diabetes is defined as having elevated blood sugar levels, either in relation to being insulin resistant or lacking the ability to produce insulin.

Many scientific studies have recently chronicled the use of vinegar ingestion for reducing glucose response in regards to carbohydrate load in both healthy adults and those with diabetes. Apple cider vinegar can help someone with diabetes control the amount of glucose in their blood after a meal.  Put a couple of teaspoons in water and drink at mealtime for best results.

The best way to lose weight, in reality, is to exercise and to eat a nutritionally balanced diet with the appropriate amount of calories for YOU!  That being said, feeling full helps with reducing the amount of food you will consume. There is some evidence that vinegar ingestion increases short-term satiety.

According to a study published in the European Journal of Clinical Nutrition in 2005, during study subjects who consumed vinegar along with a bread meal reported increased satiety after food. Another study published the same year in the Journal of the American Dietetic Association found that when you take vinegar with a meal, calorie consumption throughout the rest of the day decreases by 200 to 275 calories. Both studies used a small study group, so the evidence is considered non-conclusive.

Consuming a daily dose of vinegar led to a lower body weight, waist circumference and abdominal fat mass, according to a 2009 study in the Journal of Agricultural and Food Chemistry.

The researchers hypothesized that acetic acid, one of the major components of apple cider vinegar, may help with weight loss because it may suppress accumulation of body fat and liver lipids. Although they felt acetic acid was an important part of the significant increases that were observed, it was also felt that this doesn’t mean apple cider vinegar is a panacea for burning belly fat. Proper, balanced nutrition coupled with exercise is still considered the number one way to beat the battle of the bulge.

Apple cider vinegar is a food product and therefore naturally safe to ingest every day when taken within safe recommended doses. Side effects are infrequent with the majority of the problems coming with the accidental aspiration of apple cider vinegar or excessive potassium levels with extreme daily doses. Be sure to dilute apple cider vinegar with water if you plan to drink it, or you can mix it with olive oil and use it as a zesty salad dressing.

Make Your Own Team for Success!

When making any lifestyle changes, ensure you have a team in place to help you along your journey! Before making any major dietary changes or when starting any new natural supplements, check with your physician to ascertain if it will be a safe and effective way to help you reach your goals. Hiring the proper health professionals will make your success much quicker and more efficient.

Once you have received clearance from your doctor, hire an elite personal trainer to put together exercise programs for you which will need to be updated every 3 to 4 weeks and to keep you on track! Hiring a Certified Personal Trainer through Infofit is one of the best investments you can make with regard to your overall health and fitness. If you are serious about a future, fuelled by healthy eating, increased activity and infinite possibilities, then start with your very own Infofit life coach and personal trainer.

Did you know your current training methods could be accelerating your muscular imbalances and joint degeneration process?