Hunger and Satiety – Which is Better Fat, Fibre, or Protein?

How Does Hunger Work, Anyways? 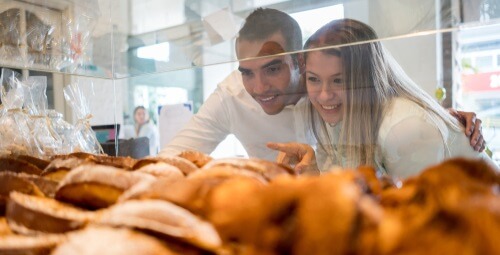 For a long time, the interplay of these two hormones had formed my basic understanding of hunger and satisfaction. Then, I read that there existed multiple hormones that controlled hunger—way more than two—and that all of these hormones were affected by different foods and macronutrients. And suddenly, everything was so much more complicated than I had originally assumed.

What Do We Need to Know About Hunger

So, what do we need to know about hunger and our hormones in order to keep fat off and stay satisfied throughout the day?

Typically, our bodies operate in this way: we gain adipose tissue (fat) and our bodies decrease its secretion of ghrelin, and increase its leptin production, telling our brains that we’re full and satisfied for the next couple hours at least. When our fat stores are lower than optimal, the opposite happens: ghrelin increases and leptin production slows. Our bodies have been designed to maintain a specific fat set point or range—if we stray too far out of it—either gaining or losing too much fat—our hormone levels adjust to bring us back into an ‘optimum health’ range.

Information regarding the satiety levels of food can also be incredibly confusing and contradictory; some say to eat more fat for lasting fullness! Some say protein is the way to go. Even more say fibre is the essential component to lasting satisfaction. So, which is right?

How Fat, Protein, and Fibre Work in Your Body to Keep Your Satisfied

In this article, I will look closely at the interrelations of food, hormones, and satiety–specifically, how fat, protein, and fibre work in your body to keep your satisfied. If you want to know how you can optimize your food choices to stay full and satisfied for longer, and to prevent unwelcome fat gain, read on!

The most calorie-dense macronutrient is fat (about 9 calories per gram); fat is also highly palatable (i.e. super delicious). So, if you’re on a fat loss campaign, fat can be particularly nerve-wracking; you never know where it’s hiding and if it’s about to derail your calorie-deficit. A story with which you may be familiar is ‘The Mystery of the Disappearing Peanut Butter’, in which one tablespoon of peanut butter, twenty minutes later, ‘magically’ becomes 1000 calories, a half-empty jar, and an endless stream of self-recriminations.

So, how does fat affect our satiety levels? And how can we use fat to stay satisfied? Because so many ‘high-fat’ diets—such as the ketogenic diet and some versions of the Paleo diet—profess to keep us full for longer and help us lose fat.

One hormone that doesn’t get much attention, but which is highly correlated with fat-induced satiety, is oleoylethanolamide, which is produced in the small intestine and functions to control weight and feeding in mammals by producing oxytocin, a feel-good hormone. Oleoylethanolamide has also been shown to play an essential role in memory consolidation and enhancement—so, don’t forego your fats if you want to feel good and remember where you left your car keys!

Different fats possess different satiety levels. Studies have found that medium-length triacylglycerols (MCT) are much more effective in suppressing appetite than long-length triacylglycerols; in one study, they found that people who consumed MCT’s at breakfast had a lower energy intake at lunch nearly 4 hours later (220 kcal on average). The most popular source of MCT’s is coconut oil, but MCT oil itself is also commercially available. Another review found that MCT oil reduced calorie intake and increased fat oxidation.

It is worth noting that not only can fat induce satiety and feel-good hormones, but many nutritional experts recommend using fat to replace the foods that may not be making you feel good and satisfied: highly-processed, sugary, irresistible carbs—such as those found in doughnuts, ice cream, and even cereals and pastas. If you’re trying to lose weight and only looking at your food in terms of calories-in, calories-out, fat can seem like a terrible idea, but it won’t spike your insulin in the way of processed sugar and carbs, which can prevent energy crashes and excessive carb-loading and eating later in the day. I would recommend, also, to be critical of the many products advertised as “low fat”; they are often higher in sugar and actually less satiating than higher-fat foods

Any nutritionist worth his or her salt (Himalayan pink salt, of course) recommends getting lots of fibre; besides being essential for your digestive health, fibre is also imperative when it comes to satiety and maintaining a healthy weight. Literal tonnes of studies have demonstrated that dietary fibre increases postmeal satiety and decreases subsequent feelings of hunger.

So, how does fibre actually work in the body to keep us feeling satisfied? On a purely mechanical level, high-fibre foods, such as most fruits and vegetables, contain more water and tend to be more voluminous, which will stretch your stomach and help you to feel full faster and for longer. Partly for this reason, many nutritionists and health experts recommend drinking a glass of water at least 20 minutes before eating. More fibre also equals more chewing, which limits our food intake by forcing our bodies to produce more saliva and gastric juice (yum), which expands the stomach and results in increased satiety!

It’s also important to remember that not all fibre-containing foods are created equal; one study found that individuals who ate wholemeal bread reported significantly higher levels of satisfaction than those who ate white bread. And these results have been demonstrated time and time again.

A crucial element of fibre’s powerful satiating potential is its effect on insulin. One study done between three subject groups–one drinking an apple-based juice, another eating an apple puree, and one eating an apple–found that the group that ate the apple demonstrated significantly higher post-meal satiety levels as opposed to the fibre-less (and chew-less) groups; the liquid and puree-apple groups also showed decreased glucose homeostasis due, as the researchers hypothesized, to inappropriate insulin release; so, next time you’re considering drinking a smoothie as a meal replacement, think again! You’re like to feel hungrier faster than if you had chosen a fibre-dense, chewy meal. So, go for legumes, whole-grains, and vegetables and fruits in their original form–not liquified or pureed.

Many argue that protein, of all the macronutrients, is the most satiating. And the research tends to agree, and has demonstrated time and time again that adequate protein is essential for long-term weight loss success.

But why is this?

Studies have shown that protein is satiating because it causes our intestines to release the hormones glucagon-like peptide-1 (GLP), peptide YY (PYY), and glucagon. What you need to know about these hormones is that they decrease blood sugar levels and will reduce  your appetite. So, if you’re looking to lose fat, these hormones are definitely your friends! Interestingly, studies have found that protein has minimal effect on ghrelin, the hormone most commonly associated with hunger.

Protein has also been shown to increase thermogenesis, which means that not only is your lean chicken breast filling you up and keeping you satiated for longer, but it’s increasing your caloric burn as well. And if you do decrease your caloric intake in order to lose weight, but increase your protein in relation to your carbohydrates and fats, you will have a much better chance of preserving your fat-free mass (including your hard-earned gym gains).

And how do different proteins compare when it comes to satiation?

One study comparing fish and beef protein and their satiating effects found that though both proteins were both effective for satiety, the subjects (healthy, lean males) who ate the fish protein meal consumed 11% less calories in their next meal than those who ate the beef protein. That being said, most research has shown that any difference in self-reported satiety levels is minimal at best; what seems to be more significant is what is accompanying your protein–many experts recommend avoiding eating protein with lots of sugar or saturated fats.

It is worth noting that all of these studies were performed under very specific, controlled conditions. The way that we eat out in ‘the real world’ will likely differ wildly from the way that we eat in a contained laboratory setting. People are complicated! We eat for a variety of reasons that often go beyond physical hunger. So, how do we make healthy, nutritious choices in our day-to-day lives? We arm ourselves with information! And that’s where Infofit can help; not only do we offer comprehensive nutrition courses, but our personal trainers can help you to find a nutrition program that works for you and your lifestyle.

Students will develop the expertise needed to design personalized nutrition protocols for clients with a wide variety of fitness, health and sport related objectives.