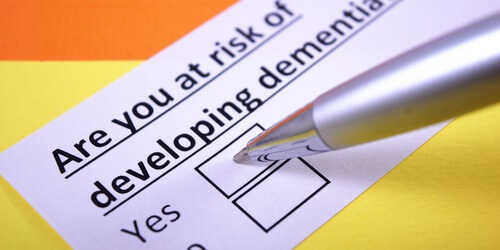 There is no known cure for Alzheimer’s disease. The disease afflicts as many as 1 in 9 of the North American population, and some experts predict that this number will only increase. For many, Alzheimer’s and dementia is an anticipated reality; as a society, we have come to consider Alzheimer’s, dementia, and neurodegenerative conditions as either a ‘natural’ consequence of aging, or an inescapable burden that we inherit from our parents, our grandparents, etc. We think to ourselves: “My grandparents/parents had Alzheimer’s, I’ll probably get it too”; and then we hold our breath, cross our fingers, and wait.

But there is no reason to accept Alzheimer’s as our inevitable destiny. We live in an exciting time for research, as we are exploring avenues of prevention and control that have, until this moment in time, remained relatively unexamined.

Certainly, biological factors must be taken into account—research has revealed that there exists specific genetic markers that correlate with the occurrence of Alzheimer’s (most notably, the APOE gene). Even taking into account a country’s quality of medical reporting and intervention, as well as cultural and societal differences, the astronomical rates of Alzheimer’s in North America, in comparison to the rest of the world, is definite cause for alarm.

So, what are we doing wrong? Because something is wrong—there’s no denying it. But by no means is the situation hopeless. There are real and significant action steps that we can take in our lives—and in the lives of our loved ones—to reduce the risk of developing such devastating cognitive diseases.

Everything comes back to sleep. If you have been in denial as to the absolute necessity of sleep, here is yet another reason to consider making deep and restful sleep a priority in your life: poor sleep quality is linked to the development of Alzheimer’s disease. We already know that a night of poor sleep does not do great things for our mood and cognitive function—and we are beginning now to fully comprehend the effects of sleep on our long-term cognitive health. One study found that sleep apnea to be highly correlated with dementia—people with the most severe symptoms of dementia also tended to suffer from sleep apnea. Studies have also found that deep sleep (stage 3 and 4 of the sleep cycle) to be the most essential to the preservation of memory and cognitive function in general. You can check out Infofit’s recommendations on maximizing sleep quality here!

In fields of health and nutrition, much attention these days is being paid to diet and gut function; science is now coming to realize the magnitude of food’s impact upon our bodies and our brains. The food we eat affects everything from our weight to our skin to the way we think about ourselves and the world; seems like a no-brainer, right? (Sorry, not sorry).

And recently, more and more compelling evidence is emerging that links the way we eat to the way our brain functions—or fails to function. Many studies have been performed and papers written with the aim of uncovering food’s impact on our brains: specifically, how we might maximize our cognitive power through food, and how food can help to stave off Alzheimer’s and dementia—and how the way we eat can put us at greater risk for neurocognitive disease.

Studies have found that metabolic syndromes—such as insulin resistance—correlate positively with the incidence of Alzheimer’s and dementia. It has widely been accepted by the medical and scientific communities that Type-II diabetes will put you at a much greater risk for developing Alzheimer’s. One study even proposed the moniker “Type 3 diabetes” to describe the closeness of the relationship between insulin resistance and Alzheimer’s. Consistently, studies have shown that the “disorders share similar demographic profiles, risk factors, and clinical and biochemical features”. So, how do we lower our risk of insulin resistance, and thus lower our risk of developing diabetes, and furthermore, Alzheimer’s and dementia? Most essentially, experts recommend cutting down on your sugar intake; the standard North American diet is brimming with refined sugars and processed carbohydrates, which has been identified as the main culprit in the development of insulin resistance and Type-II diabetes.

Some diets, also, demonstrate greater positive benefit than others for your brain and cognitive function, and, experts postulate, may help in the prevention of Alzheimer’s and dementia. Some research has shown that following a Mediterranean diet can vastly reduce your risk of developing Alzheimer’s—and can actually reduce symptoms in people with Alzheimer’s.

Ketogenic diets have also been receiving much attention these days, in relation to Alzheimer’s and other neurodegenerative disease. Some promising research has found that ketosis may have a brain-preserving effect, and may actually slow the progression of Alzheimer’s. For more information on the ins-and-outs of the ketogenic diet, you can check out my article here on the Infofit blog.

Here is yet another reason to get off the couch and get moving: numerous scientific investigations have found that leading a sedentary lifestyle will put you at greater risk for developing Alzheimer’s and dementia. On the other hand, exercise has been shown to protect the cortex of the brain, stimulate the immune system, and slow Alzheimer’s degradation process. And once an individual is diagnosed with Alzheimer’s, evidence suggests that moderate-intensity aerobic exercise can moderate its symptoms. To reap even greater brain-boosting benefit, try exercises that are unfamiliar and fun. If you or a loved one have dementia, it is highly recommended that you hire a certified personal trainer to guide you through an exercise program designed specifically for those with this disease.  And finally…

Laugh more. Spend time with the people you love. Meditate. Anything that lowers your stress and makes you feel good has been shown to have amazing benefit for your brain health–and your quality of life, overall. So, get out there and love your life!

Working with one of Infofit’s certified trainers will help you achieve your personal fitness goals in a responsible, safe and effective manner.