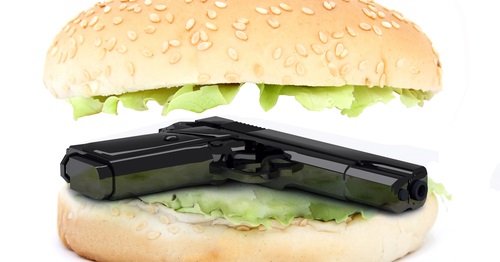 A new Harvard study found that eating a single serving of red meat per day may raise the risk of early death.

A 20% Increased Risk of Death

And even bigger risks increased with daily serving of processed meats. Eating just 2 strips of bacon or 1 hotdog or per day was associated with a 20% increased risk of death.

Most of the study participants reported eating one or more daily servings of meat.  Produced during processing and cooking, red meat contains compounds known to boost cardiovascular disease and cancer, such as saturated fat, sodium nitrites and other chemicals.

Certified sports nutrition advisors recommend that small changes in red meat consumption can make a big difference. To avoid nutritional drawbacks associated with red meat, you can work around them by making smart choices, such as, not overeating red meat and eating it cooked well done. Your medium or rare steak is actually healthier for you that one that’s well done.

Eat Less Than 18 Ounces Per Week

Cancer experts advise eating less than 18 ounces per week. Limit your serving size to no more than three ounces. Swapping for healthy protein sources, such as fish, poultry, legumes and whole grains was linked to a decrease in mortality risk, ranging from 7% for fish to 19% for nuts.

Heterocyclic amines in lab animals have been shown to cause colon tumours. In humans, a high intake of certain HCAs has been linked with a higher risk of colon polyps.

Cutting back on meat and make room for healthier sources of protein, such as eggs. The idea is just to eat less meat and better quality meat, not processed meat. Try eating poultry or fish two times a week and a vegetarian dinner twice a week. Ultimately, when you choose to eat red meat, switch to leaner cuts and grass-fed cattle.

Scale Back on Red Meat for The Environment

People are urged to scale back on red meat consumption for the environmental reason too. A quarter-pounder with cheese takes 26 OZS of petroleum and leaves a 13 LBS carbon footprint. This is equivalent to burning 7 LBS of coal. Make the global decision and scale back!

This 24- hour online Sports Nutrition Course is s ideal for all individuals with an interest in anti-aging, dietary analysis, health and fitness management.