Seafood You Should or Should Not Eat

Be Ocean Wise and Eat the Right Seafood

To save the oceans and our health, we need to learn to be ocean wise and  eat the right fish. According to CSNA Sports Nutrition and ACE Certified personal trainer Sylvain Cyr, “Seafood is one of the  healthiest and the most environmentally friendly source of protein on earth. However there are risks associated with eating seafood, and you need to be ware of what you are eating” 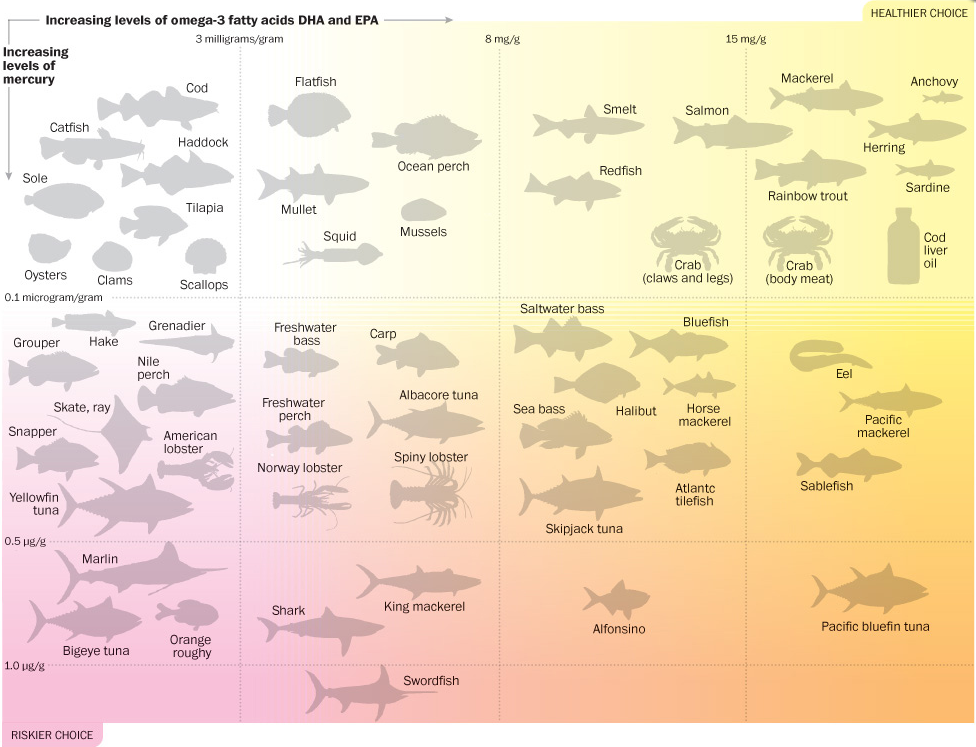 Elevated Amounts of Mercury in Some Seafood

Researchers have learned that elevated amounts of mercury exposure increases risk of type 2 diabetes later in life by 65 %. The research defines a disturbing nutritional scenario. The main source of mercury in people comes from fish and shellfish consumption, almost all carry traces of mercury.

Fish and shellfish are also important for a healthy diet.  Seafood is loaded with lean protein, omega-3 polyunsaturated fatty acids and magnesium.

The world’s commercial fishing fleets have basically over-fished the oceans by fishing above scientifically recommended catch limits. They are destroying nursery habitats for fish and catching and discarding non-target species. Beware of organic seafood. Although there are some organic fish farms outside of the country, they aren’t certified by local authorities. Instead of organic, look for healthy wild picks.

Larger fish take years to reproduce, and chronic overfishing has left many big fish species in serious and immediate danger.  The best example is the orange roughy. They live to be 100 years old and only start reproducing at age 40. Over-harvesting young roughy fish has left the species in limbo. If we avoid these species now and embrace science-backed numbers when deciding out how much to take from the sea, the good news is that we could someday enjoy these species again. Good ocean management makes sure there’s enough left in water for next year.

Listed is the healthy fish left to eat, the ones to indulge in, which ones to enjoy occasionally, and which ones to completely avoid.

Smaller species rapidly reproduce and abundant, strong, and fertile part of the food chain. By eating fish lower down on the food chain, the smaller your footprint on nature. They contain the most concentrated sources of the omega-3 fatty acids EPA and DHA. One serving (3.25 ounce can) of sardines actually contains over 50% of the daily value for these important nutrients. An excellent source of vitamin B12 and promotes cardiovascular well-being since it is intricately tied to keeping levels of homocysteine in balance.

Farmed or wild Oysters, mussels, and clams are best found from Atlantic and South Pacific since the exposure to toxins from Fukushima’s disaster. It’s a  good source of Magnesium and Phosphorus, and a very good source of Protein, Vitamin D, Vitamin B12, Iron, Zinc, Copper, Manganese and Selenium.

Salmon should be an occasional treat is packed with essential nutrients, especially protein, omega-3 fatty acids, vitamins and minerals.

1/3 of all fish caught in the world are turned into fish oil or meal and  81%  goes to feed  farmed fish like salmon. It takes 5 lbs of wild fish to produce 1 pound of farmed salmon, farmed salmon tends to be full of parasitic sea lice, requiring the treatment of high-dose toxic chemicals. This is considered not a favorable footprint on nature.

Shrimp fleets tend to catch a lot of other things in their nets. When you eat shrimp, you’re responsible in part for 5 pounds of bycatch, including sea turtles and pretty much any other type of fish in the Gulf.  That bycatch is injured, killed, or discarded at sea. Farmed shrimp isn’t any better. It’s been found to harbor banned antibiotics—even ones that could cause cancer—pesticides, and bits of insects.

Overfishing has brought Bluefin tuna and Chilean sea bass to the brink of collapse.