What Exactly is Spirulina? 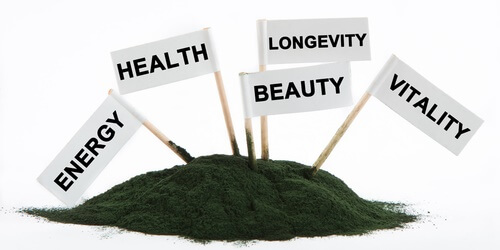 Spirulina is a one-celled, plant-like organism found in salt water and some large fresh water lakes. Its scientific name is Arthrospira platensis, and is from the Cyanobacteria family; which are the oldest known fossils, being more than 3.5 billion years old. Their dark-green color can give bodies of water their blue-green appearance.

What Nutrients Does It Offer?

Spirulina has been considered a safe source of protein, vitamins, and minerals for many centuries, dating back to at least the 9th century.

Spirulina is a dietary source of protein, B-vitamins and iron. In 1-cup it contains: Protein157 g, Vitamin A 638IU, Vitamin K28.6μg, Vitamin B 314.4mg, Iron 31.9mg, Magnesium 218mg, Total Omega-3 fatty acids 922mg and Total Omega-6 fatty acids 1404mg.  However, the normal daily dose of Spirulina is generally 1-3 teaspoons (not cups), so don’t expect to get these levels of nutrients, vitamins and minerals in your standard dose.

It is considered to be a complete protein and contains the full spectrum of amino acids including Tryptophan, Threonine, Isoleucine, Leucine, Lysine, Methionine, Cystine, Phenylalanine, Tyrosine, Valine, Arginine, Histidine, Alanine, Aspartic acid, Glutamic acid, Glycine, Proline, Serine.  Do note though, while spirulina typically contains about 60% protein, on average, you’d be lucky to get maybe 2 grams of protein in a teaspoon, so consider it a supplement and not your foundational source for protein.

That said, its high concentrations of protein, omega fatty acids and amino acids, make this an important source of vital nutrients for people following vegetarian and vegan nutrition plans

What About Quality? Which One Should I Choose?

Choose Spirulina that is grown in controlled conditions in fresh water and avoid those grown in a more natural setting where they are more likely to be contaminated by bacteria and heavy metals. Make sure the one you choose has been tested and found free of contamination.  Avoid those from Japan and China due to radiation and heavy metal contamination risks respectively.

Spirulina Can Be Beneficial for Several Conditions & Treatments

Spirulina is used as a source of protein, B-vitamins, and iron for vegetarians and vegans.

Side Effects and Precautions

People with auto-immune diseases such as multiple sclerosis (MS), lupus (systemic lupus erythematosus, SLE), rheumatoid arthritis (RA), pemphigus vulgaris (a skin condition), and others, should avoid taking Spriulina. Spirulina causes the immune system to become more active, which may increase these disease symptoms.  Along this same concept, those individuals taking medications that decrease the immune system (Immunosuppressants), should also avoid using spirulina so to reduce the risk of over-stimulating the immune system.

The most common side effects of Spirulina use include low grade fever from an increase in metabolism, darker stool, excessive gas (which is an indication that your digestive system is not functioning properly) and restlessness due to the body converting the protein into energy.  Rash, breakouts and itchy skin may also occur (caused by the colon cleansing process), but is temporary. Some individuals experience sleepiness (caused by the detoxification process) and may mean that your body is exhausted and needs more rest.

Please ensure to consult a physician before taking Spirulina if you have a severe seafood or iodine allergy, if you are pregnant, nursing or have hyperthyroidism.

Due to its many benefits and dense nutritional value, spirulina is a great superfood and should be considered as an excellent addition to your diet.

Learn more about nutrition with our Sports Nutrition Course, the Principles of Sports Nutrition(PSN) will teach 110 fundamental sports nutrition principles essential to achieving and maintaining optimum health, performance and longevity.