Benefits of a Personal Trainer While Pregnant - Pre Natal Fitness

Until recently, many people believed and were cautioned by physicians that pregnant women avoid exercise. The warning was for the athletic and non to avoid pre natal intense exercise. This warning was particularly emphasized when the exercise involved bouncing or some sort of impact, like aerobics and running. Pregnant women were advised to slow impact activities down to swimming, walking and stretching. But research from scientists  like Dr. James Clapp III, author of “Exercising Through Your Pregnancy,” is debunking the thought. Pre natal fitness evidence shows moderate or intense activity is actually safe.

Regular Weight-Bearing Exercise is Beneficial for Both Mother and Baby

His team found that women who trained at the same rate throughout their pregnancy, and increased the intensity of their exercise program later in pregnancy, gave birth to babies who had less body fat and lighter than women who exercised far less in the final trimester. They learned that regular weight-bearing exercise is beneficial for both mother and baby. The value of the benefit varies depending on the timing and amount of exercise. If the pregnancy is normal or healthy, a regular pre natal exercise program monitored by a certified personal trainer can do nothing but improve the situation.

Benefits of Having a Pre Natal Fitness Personal Trainer

Studies have shown the remarkable and powerful benefits of having a personal trainer while pregnant including running during pregnancy and postpartum. New research suggested that ladies who are involved in pre natal fitness exercise, monitored with a personal trainer, during pregnancy not only helps the mother in various ways but gives their developing fetus a neurological advantage.

Fetuses in The Womb Exposed to Exercise Have Better Autonomic Function 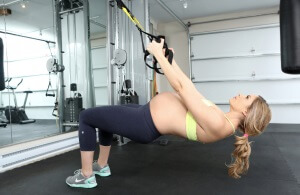 In addition, other research learned that when compared to fetuses not exposed to exercise, fetuses in the womb exposed to exercise have better autonomic function. This benefits the fetuses heart beat, blood pressure, breathing rate, and functions in the internal organs otherwise known as the cardiac autonomic nervous system regulation.

“It is recommended that personal trainers start pregnant lady’s exercise program by training vigorously early on and then reduced the intensity as they approached their due dates lowering intensely through the 9th month. Exercising during pregnancy in a moderate to intense fashion not only helps mothers with a easy birth and recovery, but benefits newborns. It all depends on the timing, intensity  of  a monitored exercise program,” according to master fitness instructor and ACE certified personal trainer Sylvain Cyr.

Pre Natal Fitness Improves the Brain and Heart of Your Child

“Pregnant women who practice intense pre natal fitness regularly have larger placentas when compared to their more sedentary peers. Studies have shown by including a monitored intense pre natal fitness program, new babies arrive far healthier and weigh less at birth. Maternal exercise is probably the leading and earliest intervention to improve the brain and heart of your child”, says Cyr.