The Truth About Running Shoes

The Link Between Running Shoes, Injury, and Performance 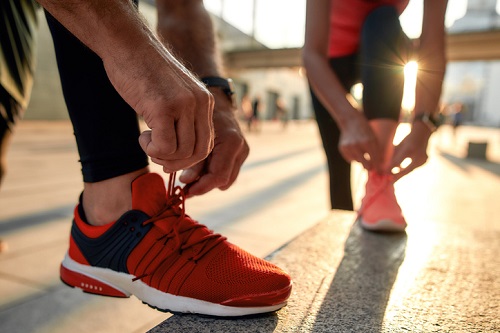 If you’re an elite runner—or even just a casual weekend jogger—you have probably gone through the painstaking process of picking the “right” pair of running shoes. Our world today enjoys an incredible amount of athletic wear options, and athletic footwear, especially, has been the focus of extensive scientific (and pseudo-scientific) study. Experts exist who have been specifically trained to match you with the shoe that will make you run faster for longer and turn you into an overnight ultra-marathon-running sensation.

But how much of our obsession with high-performance footwear is justified? Do the more technologically-advanced and personalized shoes–including the new ‘minimalist shoes’ that are now hot on the market–actually perform better than the inexpensive and ‘low quality’ options?

The short answer: no.

Most Running Shoes do not Prevent Injury

Countless brilliant scientific minds have dedicated themselves to explicating the link between injury prevention, running performance, and footwear, and most of them have found that running shoes that are specifically fashioned to an individual’s foot, arch and/or plantar shape are not more likely to prevent injury–a finding which has been demonstrated in many studies. Furthermore, there seems to be no relationship between the cost of a pair of shoes, running performance, and comfort (sorry).

What about ‘minimalist’ footwear?

Today, the fitness and athletic wear industry has been increasingly focused on the most ‘natural’ mode of locomotion: barefoot running. In response, minimalist shoes designed to mold to and mimic the natural shape of the foot have risen in popularity. Experts argue that conventional running shoes are actually a very recent invention–having been around for only half a century–and that our bodies are unadapted to them. With barefoot running, they say, our feet and entire kinetic chain aren’t thrown off-balance and forced into unnatural running patterns. The theory is that minimalist footwear mimics barefoot running modes and allows us to “go with the flow” and attune to what feels best for our bodies. Consequently, minimalist shoes prevent injuries and improve our running performance.

But..are the claims backed by science?

One study looked at a group of Marines who wore different types of shoes while training–stability shoes, motion-control shoes, cushioning shoes, and minimalist shoes–and found that the Marines who wore minimalist footwear tended to be younger and fitter; they performed more push-ups, pull-ups, and sit-ups. But, controlling for age and fitness level, the same study found no relationship between injury risk or prevention and minimalist footwear, and that running in minimalist footwear is not the same as running barefoot. Specifically, barefoot running changes the actions at the knee and ankle joints. Running in any and all footwear, including in minimalist shoes, is not comparable to barefoot running, as one study concludes.

More alarmingly, some research has found that minimalist footwear can actually increase a runner’s risk of injury. One study found that compared to runners with “conventional footwear,” runners wearing minimalist shoes experienced “higher impact kinetics” and were more prone to developing overuse injuries. Another article examined novice runners with minimalist shoes and found that they were much more likely to develop a condition called “bone marrow edema,” which is an unnatural build-up of fluid in the bone marrow.

So, what shoes should we be wearing?

For as long as humans have been walking the earth, we have been running. Hundreds of thousands of hours of scientific research have been dedicated to the subject, and there so much that we don’t know. Every foot and every body is different and the issue of running footwear needs more research: that seems to be the scientific community’s general conclusion on the subject.

But there has been some promising research that can help us to take steps in the right direction–literally and figuratively. One study found that the best running shoes for injury prevention are–drumroll, please–many shoes. Yep, having several pairs of shoes and alternating between them seems to be a good method for preventing overuse injury in recreational running.

Just as every foot is different, every movement pattern is different. Many experts, personal trainers included, are of the belief that most people have a preferred movement pattern, and that what is best for performance and injury prevention are shoes that allow individuals to move in the way that feels most natural. Most people pick shoes based on an intuitive and qualitative “comfort” scale and maybe that’s the way it should be?

So, don’t get overwhelmed next time you’re choosing your next pair of running shoes! If you feel lost, consider enlisting the help of an experienced personal trainer–they will be able to determine your preferred movement path and find the right shoe for you and your body.